I was especially excited about the project this year because I think it might really be used. Forking a project started in San Francisco and continued in Atlanta (among others), we had some supposedly working code to begin with. That turned out to be a mixed blessing for me. The PHP and javascript code I started with showed its genesis from hackathon to hackathon fairly clearly, each generation of repurposing piling up like a different brands of spaghetti, mine on top! Fortunately the hackathon format at least limits the volumes of stringy pasta, so the server app is still simple enough to consider deploying to run toward a future demolition and reconstruction.

My teammates and new friends Brad Hellyar and Riley Snyder tackled different issues. Brad got the iOS app running, fixing some tricky bugs on the way and receiving help gratefully from John Jusayan. Riley proved that hackathons are not just for coders. A brave journalism student, he made sure our research questions were answered quickly and correctly, made twitter and facebook accounts for our app, and even updated HTML content. Those efforts were also assisted by the originator of the app idea Scott Hall and front end wizard Steve James.

With all that going for us how could we help but make a 2nd place finish in the Biggest Little City sponsored category. Whoop! We had a working iPhone app and website to demo at the end. 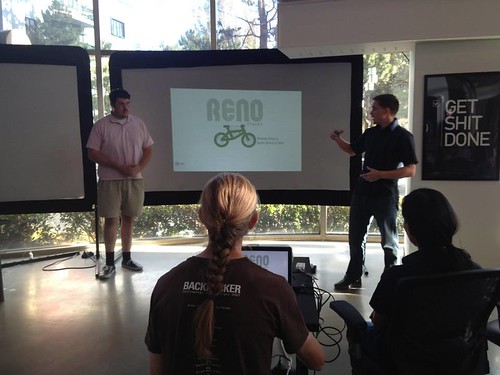 Tomorrow we’ll meet with the Truckee Meadows Regional Planning Agency to plot the future of the app. Stay tuned!