Chased off by a bear

Let me dash any hopes for pictures right away – there is no photographic evidence of this, the first time a bear has run me out of a campsite.

The signs were clear but odd. A big pile of less-than-two-day-old bear scat near our prospective tent site should have been enough, but we were tired. A small pile of only slightly gnawed crab apples under a nearby tree was more confusing. Had a bear been baited here? Was it saving a treat for later? We optimistically decided that a bear had tried the discarded treats, pooped, and left for better pickings.

The bear was probably watching us do all this from the thick undergrowth of the adjacent aspen grove, where it had first dibs on the camping, but it waited until we were asleep in our tent to investigate. Ann woke up from a dream of a snorting animal to hear something “galloping” away from the tent with great crashing noises. I got up to investigate, clanging Ann’s metal hiking poles, but the animal seemed to be gone.

My previous encounters with black bears had all ended with them running off, so we got back in the tent. This time I awoke to snuffling and snorting, and again the great crashing retreat. The bear did not remain silent this time, though, but continued to crash around in the woods making a variety of novel noises. Whines reminiscent of Chewbacca, rhythmic grunts, snorts, and barks all emerged from the trees while we worked quickly to break camp and finally take a hint.

Once we were packed up and in the car we sat and listened to the continuing serenade for a while, then shined our headlamps into the woods just long enough to make out a bear-shaped silhouette around the glinting eyes. Another set of eyes blinked high up in the nearest tree – an owl for whom we had provided the evening’s entertainment.

A few miles down the highway we pulled over in a wide open meadow and flopped for the remainder of the night on our tarp, far from any lovely aspen groves. 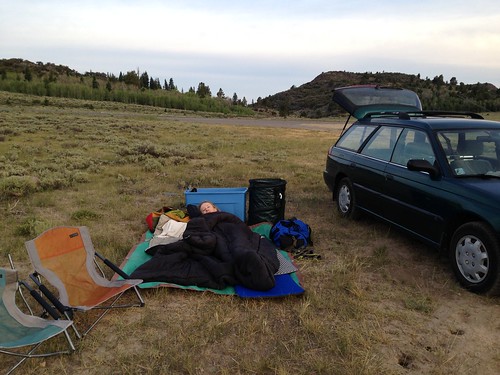